I should type a bit about the Roberto Matta Echaurren show while it's still hanging out with us; if you are in the NY metro area, have a pulse, and sometimes like it when people draw pictures, every Matta show is a major event and and every phase of his work is of singular significance. Here are works from 1988 on, with the notable exception of 1975's large scale "L'homme descend du signe," from the most figurative phase of his career: 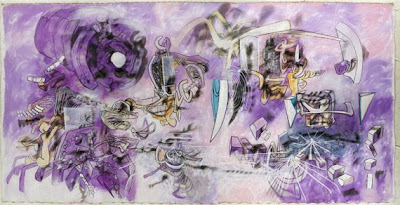 It may be hard to see on the web repro (one more reason to see the 13' 5-3/4" x 27' 4" masterpiece) but there are white lines found around the painting, set apart from perspective, of figures, demotic and unintelligible writing, which aren't found in his earlier phases and but are in the later works in the show, perhaps picked up from Polke and/or Twombly in a way that heightens the effect of "seeing through," inspired by Duchamp who credited Matta for "the discovery of regions of space until then unknown in the field of art." Matta painted numerous alternate versions of Duchamp's Large Glass. On the lower right hand corner Matta appears to reference the capillary tubes of the Large Glass' lower left hand corner, of which Duchamp had derived the tubes' shape through chance operations, which here instead of dangling malic molds connect to empty boxes, which have the three dimensional aspect of the "parasols - drainage slopes - sieves" in the lower half of the Large Glass and the shape of the "halo of the bride - draft pistons" of the upper half. An ascension to the vertical dimension is suggested on the left in a step ladder of spinal bones leading upwards to a being enclosed by a rib cage, which combined with the other elements of the work speak inversions within a previously codified though never explained language and extend out into new dimensions.

Matta was possibly the most theoretically driven painter in art history, and his works from the Eighties show how the act of applying paint to the canvas repeatedly allowed him to realize the scope of what he originally envisioned. When Artaud saw the Balinese theater, he sought to replace the psychological with the metaphysical, citing the conventions of psychological drama, but for Matta (as Artaud eventually agreed) these are not contradictions. Matta originally went to Paris to study architecture with Le Corbusier and viewed that which is built as an extension of human psychology, imagining architectural structure that derived from the range of human emotions - 1991's "Cosmos Mental": 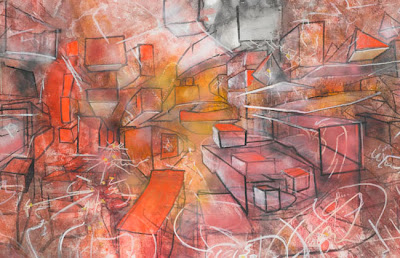 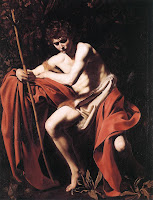 Balinese drama, presenting what Artaud described as a "blend of explosions, escapes, passages, and detours in all the directions of external and internal perception (which) constitutes a supreme idea of theater.. this revelatory aspect of matter, which seems suddenly to scatter into signs in order to teach us the metaphysical identity of the concrete and the abstract.. carried to the nth power.." derives from pre-Hindu animist beliefs, that all matter possesses a soul, and that the above mirrors the below, like when Caravaggio's Baptist looks down (right) at the Nelson Atkins while Leonardo's points up. Breton wrote in 1944 "..in the person of Matta.. everything which is seen at first sight and no longer with second sight tends to be formulated on the principle of total animism. This animism, tracing its path through Lautreamont and Rimbaud, has continued to mature since romanticism, where it may be observed at its infantile stage... What endures is the conviction that nothing is in vain, that everything that can be contemplated speaks a meaningful language which can be understood when human emotion acts as interpreter. For anyone who has eyes to see, all these aspects are open, not just open to the light like Cezanne's apple but open to everything else as well, including the other opaque bodies; they are constantly ready to blend together, and only from this fusion can be forged the key which is the only master-key to life."

Animists on the island of Pulau Sumba believe that the sky and the sea are engaged in a cosmic battle, but right after this essay of Breton's, Matta replaced the horizon line in the 1940s with dimensions corresponding to what he called conscienture, the painting of consciousness. The time dimension is represented is works like this 1999 canvas "Architecture du temps (un point sait tout)".. 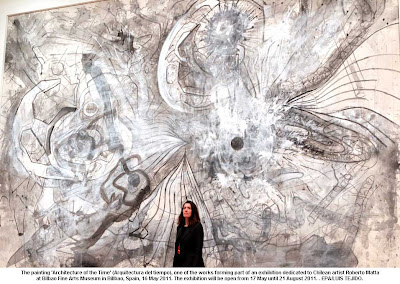 On the Pace website is his "Oëramen (La conscience est un arbre)" in which the animals radiate in a night scene mingling with disembodied organs as an illustration of conscienture. M'Onde - a large bird with unintelligible texts coming out of its mouth - I can't find pics any of his mosaics online but there are (not in this show) large scale mosaics - at the first of two Matta shows I've seen in Paris was a large scale "Creation of the Earth." The enthusiasm around Matta that shows like this provoke will hopefully lead to a touring retrospective, as to match up his early work with his 70's canvases and later works would revisit what he did to NYC in the 40s.
Posted by Ian Keenan at 11:13 PM