Ezra Pound's interest in Asian literature intensified when Mary Fenollosa picked him to be the executor of her husband Ernest's writings in late 1913, after she read "In a Station at the Metro" that Spring, which he called in 1916 a "hokku-like sentence." Though translating Chinese poetry throughout his life, Pound never so far as I know translated a haiku or referred to a Japanese Haiku master in publications or letters. 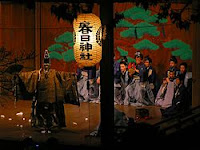 Much suggests his discomfort with Japan's spiritual and animistic tradition of Shintoism - which he never mentions by name - such as qualifications made for his translations of Japanese Noh plays in 1916 (warning: Uncle Ezra talking) "These plays are full of ghosts, and the ghost psychology is amazing. The parallels with Western spiritist doctrines are very curious. This is, however, an irrelevant or extraneous interest, and one might see it set aside if it were not bound up with a dramatic and poetic interest of the very highest order" and "The suspense is the suspense of waiting for a supernatural manifestation - which comes. Some will be annoyed at a form of psychology which is, in the West, relegated to spiritistic seances. There is, however, no doubt that such psychology exists. All through the winter of 1914-15 I watched Mr. Yeats correlating folk-lore (which Lady Gregory had collected in Irish cottages) and data of the occult writers, with the habits of charlatans of Bond Street. If the Japanese authors had not combined the psychology of such matters with what is to me a very fine sort of poetry, I would not bother about it." Pound wrote to patron John Quinn (who first received word of The Waste Land's existence) in 1917: "China is fundamental, Japan is not. Japan is a special interest, like Provence, or 12th-13th Century Italy (apart from Dante). I don't mean to think there aren't interesting things in Fenollosa's Japanese stuff... But China is solid."

In 1937 Pound tried to disassociate an authentic rendition of Hinduism from "the general impression of Indian thought now clouding Occidental tradition. This cloud exists, and until some light or lightning disrupts it, many of the better minds in the West will be suspicious of all Eastern teaching.. It is in the opinion of the hard-headed, as distinct from the bone-headed, West that Westerners who are drawn to Indian thought are Westerners in search of an escape mechanism, Westerners who dare face neither the rigors of mediaeval dialectic nor the concrete and often exhausting detail of the twentieth-century material sciences." 1939: "Confucian faith I can conceive. I can conceive of a man's believing that if, and in measure as, he brings order into his own consciousness (his own 'innermost') that order will emanate from him. The cycle of Chinese history, the reception of the 'mandate' (called the mandate of heaven) by various dynasties, seem to offer demonstrable evidence of this process." The order of consciousness is to emanate from nature, just as in the Rig Veda from the fourth millennium BC, the first known poetry:


"May there be peace on mortal, immortal and divine planes. I meditate upon the most brilliant splendor of the Sun God. May he stimulate our intellect (so that we are inspired to take the right action at the right time)."

This being a blog I may wonder aloud whether Pound read any Bashō before writing "In a Station at the Metro," as any anthology of haiku would contain them. Pound's emphasis on "spaces between the rhythmic units"

may have come from the way haiku were translated in keeping with the solitary unit of each ideogram on the vertical plane of Japanese writing as with Bashō's early (1666) poem:

in the following year Bashō relates blossoms to faces:

do those blossoming faces
make you feel bashful?
hazy moon

I have always viewed 'petals' to be an appositive to 'faces'  - the faces are the petals - (Kenner: "Pound called it an equation, meaning not a redundancy, a equals a, but a generalization of unexpected exactness") and this interpretation agrees with my speculations of Bashō's influence. Pound said the poem was inspired by a moment in 1916 he "saw suddenly a beautiful face, and then another then another.. and then another beautiful woman."  The Gustave Moreau Museum was most certainly open to the public in Paris at the time, which contains Moreau's disembodied face of "The Apparition":

Just like on an airplane in the custody of military police facing treason charges in 1945, "looking down at the tremendous sunlit sea (he) became, on his first ocean crossing by air, ecstatic.." he would assign mythological significance to the underground Metro.  The "crowd" waiting for the train evokes how "Odysseus and Orpheus and Kore saw crowds in Hades" (Kenner).  Kenner also suggests several times in The Pound Era the Persephone myth: "since past poetry has occurred in time, a poetic in transformation will assimilate history to a present moment, and glimpse Persephone in a station at the Metro," as does Cocteau, Chris Marker, etc.

Pound was well aware of Frazier's Golden Bough by this time: in 1913 he so described the poet Allen Upward to Dorothy Pound: "He seems to [know] things that aren't in Frazier," writing to Margaret Anderson in 1918 "Frazier has done the whole thing monumentally, BUT good god how slowly, in how many volumes."  Frazier wrote that Persephone "can surely be nothing else than a mythical embodiment of the vegetation, and particularly of the corn, which is buried under the soil for some months of every winter and comes to life again, as from the grave, in the sprouting cornstalks and the opening flowers and foliage of every spring. No other reasonable and probable explanation of Persephone seems possible."

Aeneus carried the Golden Bough with him in the Underworld, but a "wet, black bough" is another sort of branch, like the "matted boughs" of "the immemorial forest" that, by Frazier's account, he encountered there: "(Virgil) describes how at the very gates of hell there stretched a vast and gloomy wood, and how the hero, following the flight of two doves that lured him on, wandered into the depths of the immemorial forest till he saw afar off through the shadows of the trees the flickering light of the Golden Bough illuminating the matted boughs overhead. If the mistletoe, as a yellow withered bough in the sad autumn woods, was conceived to contain the seed of fire, what better companion could a forlorn wanderer in the nether shades take with him than a bough that would be a lamp to his feed as well as a rod and staff to his hands?"

So it would be the faces of the crowd and not the Golden Bough that illuminate the immemorial forest of the Metro station, consistent with Pound's use of the Golden Bough image at the crucial end of Canto I, affixing it to Aphrodite's "dark eyelids."   Though here Pound doesn't mention Aeneus, Venus's (Aphrodite's) son, he does so repeatedly in the following Cantos and the mention of Aphrodite and the Bough reference positions Aeneus, defender of Troy, as a mirror image to Odysseus, the subject of Canto I heretofore and one of the destroyers of Troy.  Aphrodite is also the mirror image of Artemis, the main figure in Frazier's book, as Cy Twombly documents in his painting from his Ilium series which has the two at the top of the two columns of names: 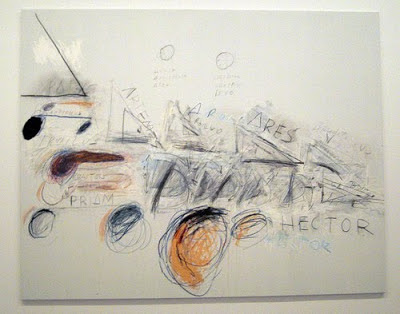 Michaux: "The Chinese have a talent for reducing being to signified being (something like the talent for algebra and math). If a battle is to take place, they do not want to serve up a battle, they do not simulate it. They signify it. This is the only thing that interests them, the actual battle would strike them as vulgar."

Frazier traces the Golden Bough to "Diana's (Artemis') Mirror," the lake of Nemi near Rome where "the divine mind of Turner" depicts Sybil at the gates of the Underworld holding Aeneus' offering of the Golden Bough as the Fates dance in a circle: 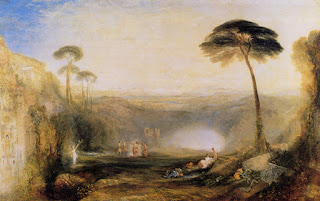 During last year's hurricane in which owing to its noteworthy but not so menacing forecasts I permitted myself to upload Turner storms, I was told that people look at paintings in reproduction, as Frazier and it would seem Pound did, had the curiosity visited him, while Turner's painting had been loaned by the Tate to Dublin before returning there for current visitors.

Jung lamented years later "Modern man does not understand how much his 'rationalism' (which has destroyed his capacity to respond to numinous symbols and ideas) has put him at the mercy of the psychic 'underworld.'" If it was, in fact, corn harvests of underground Persephones that made up Pound's apparition, he would in late 1921 set his hand to edit another Frazier-influenced poem: Eliot's The Waste Land, which, like "In a Station of the Metro," sets the fertility rituals in the city,  relating assorted expressions of sexuality "in different voices." The example cited by Frazier of ritual sexual intercourse as fertility rite was from Java, of animist derivation though Frazier doesn't use the term, and the book makes several references to Shintoism. Edward Tylor and then Frazier developed the style of relating rituals from different parts of the world thematically that would inspire this tendency in Claude Levi-Strauss and then Chris Marker's Shintoist references in Sans Soleil.

Eliot wanted to see paradise just like Dante, and his poetry thereafter consisted mostly of religious symbolism often along the lines of Goethe's definition: "the particular resembles the general, not as a dream or shadow, but as a living, momentary revelation of the inexplicable." The Waste Land's references are more allegorical than symbolic as when Baudelaire's Unreal City gives way to a Dante passage. Benjamin wrote:  "It was owing to the genius of allegory that Baudelaire did not succumb to the abyss of myth that gaped beneath his feet at every step" and "if we can distinguish between spinning and weaving activity in poets, then the allegorical imagination must be classed with the former.. it is not impossible that the correspondences play at least some role here, insofar as the word, in its way, calls forth an image; thus, the image could determine the meaning of the word, or else the word that of the image." 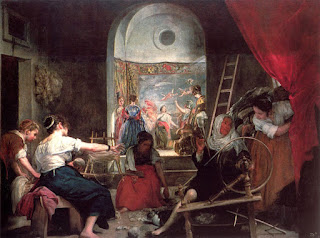 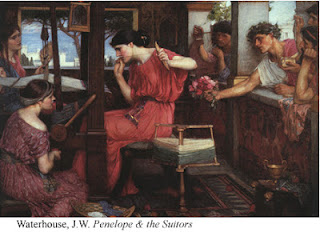 Pound wrote in his "Pragmatic Aesthetics" "Art is the particular declaration that implies the general; and being particular (Hamlet, Odysseus, Madame Bovary) may not divert, distract, melt and muddle like an abstract declaration which becomes a party cry; or cloak or mask for a hundred different ideas... Philosophy, philosophical expression [is] nothing but a vague fluid approximation; art achieves a MORE PRECISE manifestation" and elsewhere "The statements of analytical geometry, he said, 'are 'lords' over fact. They are the thrones and dominions that rule over form and recurrence. And in like manner are great works of art lords over fact, over race-long recurrent moods, and over tomorrow."

John Tytell wrote "(T.E.) Hulme had heard Henri Bergson discuss the image as a locus between intuition and concept, and he realized that in poetry the image could become a new lever suggesting feeling. Pound attended a series of Hulme's lectures on Bergson and then described to Hulme the difference between what Pound called Petrarchan 'fustian and ornament' and Guido Cavalcanti's more 'precise interpretive metaphor.'"

Eliot's religious portrait of modernity is given the traditional ending of the Upanishad of the post-Vedic age of the second millennium BC. The worldly Pound ends by saying "I have tried to write Paradise/ Do not move/ Let the wind speak/ that is paradise."  The Rig Veda, at the dawn of poetry: "Exulted by our silence, upon the winds we have ascended."
Posted by Ian Keenan at 12:42 PM