Piri' Miri Muli' readers headed to Art Basel Miami next month, perhaps on their way to Finance Zurich Grand Cayman, are summoned to check out Regina Silveira's film at Alexander Gray. Silveira's show at the gallery was the summer show that stuck most in my mind, displaying the Brazilian's 1971 Labirintos (left) that predated Hélio Oiticica's Penetrables by a year. Post-WW2 geometrical abstraction in Caracas and Buenos Aires took the form of architectural design that was compatible with dictatorships, influencing the São Paolo Concretists along with a 1950 retrospective of the Swiss designer Max Bill. For Silveira, enrolled at the São Paulo art school, and Oiticica, based in Rio, the labyrinth was a way to connect geometry with classical literary and spiritual archetypes. 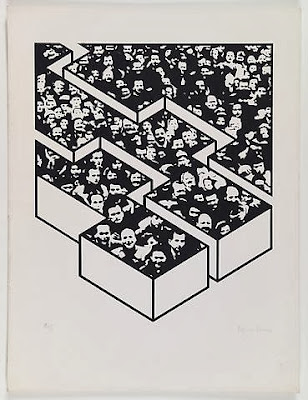 If Oiticica's Penetrables, termed "Dionysian" by Lygia Pape, contained latent social commentary, Silveira's utilization of the shapes of the São Paulo Concretists for the 1971 group portrait of her city folk called Middle Class & Co. were more akin to Theseus in the maze with the beast. English language blurbs of the show note the "faceless masses" and "standardized society" of Middle Class & Co., (right and below) but the series should be viewed in its historical context. The Brazilian middle class had grown and urbanized during the 50s as Juscelino Kubitschek industrialized the economy, welcoming foreign investment in the automotive industry that grew the area around São Paolo with minimal unionization, causing disruption and hardship for the rural poor that were driven off their land by higher agricultural demand. After the resignation of his elected successor in 1961, liberal VP João Goulart became president and organized the rural poor, passed land reform laws, increased student participation in government, extended the vote to enlisted military men and illiterates, and nationalized the pharmaceutical and meat-packing industry. In addition to vocal and active Communist factions in the electorate and military, belief in 'nationalism,' restrictions in the role of international financiers and corporations, was popular in both left and right circles, and by most accounts the ascendant middle class was concerned that Goulart was going to scare away foreign investors. In early 1963, a referendum gave Goulart broader presidential powers instead of a parliamentary role, labor protests escalated, and inflation decreased the middle class' purchasing power. Early the next year he expropriated unused farm land and extended the government's oil monopoly, and the coup that ousted him on April 1 would bring 21 years of military government. 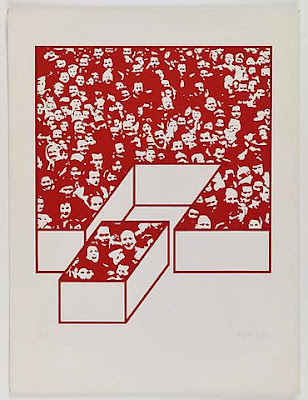 Recently declassified documents attempt to suggest that LBJ was spurred to provide military support to a locally autonomous military uprising, but the US had begun to infiltrate and indoctrinate the Brazilian military as early as 1948 through the ESG institute,  whose graduates included most of the coup leaders, and when the CIA was formed it created the IBAD institute in 1960, whose financing and organization led to legislative victories for the right in 1962.  General Medici, President during the most repressive period of the early 70s, served previously as military attaché in Washington and was trained at the ESG as were his two predecessors.

The University of Brasilia was invaded the day after the coup, after which rural peasants organized by Goulart were subject to violence and killings as the judiciary, military, legislature (including Kubitschek), and civil service were purged of anti-fascist elements. In July 1964, the government created a bureau to counteract internal subversion, and after a new constitution eroded representative democracy in 1967, strikes escalated and dissidents turned to armed struggle, inspired in part by the Cuban revolution.  The A1-5 of December 1968 dissolved congress completely, censored cultural expression and suspended legal rights for anyone expressing criticism of the government. Consumer credit enabled 40% of households to own television sets in 1970, up from less than 10% a decade before, providing a new form of propaganda for the military that monopolized the programming.

After artists and intellectuals had protested for free expression earlier in the year, A1-5 drove many out of the country like Oiticica and, while penning the first works of liberation theology, Hugo Assmann. While Silvera, exiled in Puerto Rico,  was conceiving Middle Class & Co., the Brazilian middle class was enjoying increased prosperity from a rise in exports while Brazil's popular current president, Dilma Rousseff, was being tortured by military operatives after having robbed banks to fund her militia. The complicit middle class faces are not shown pacing a Constructivist or Concretist prison, but being framed by Concretist shapes; as Concretism had been a tool of the state, the frame presents an ambiguous representation of perception that may be the artist's or the state's: the king and queen in the mirror of Las Meninas.

Silveira's Neo-Concretism takes the form of attempting mathematical precision in the representation of tracks left by animals or vehicles and the shadow. Silveira to my knowledge has never said that her shadows are Jungian nor encouraged that interpretation: as she is preoccupied by process and materials she perhaps yearns to be among those whose shadows in paintings Jung referenced, because they could paint them without thinking of the guy, who was at time at the height of his popularity. Jung: "By shadow I mean.. all those unpleasant qualities we like to hide, together with the insufficiently developed functions and the contents of the personal unconscious." 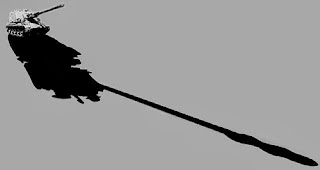 In The Undiscovered Self he writes "(The individual) harbors within himself a dangerous shadow and adversary who is involved as an invisible helper in the dark mechinations of the political monster... Wherever justice is uncertain and police spying and terror are at work, human beings fall into isolation, which, of course, is the aim of the dictator state, since it is based on the greatest possible accumulation of depotentiated social units.. it is.. love for one's fellow man that suffers most of all from the lack of understanding wrought by projection." The labyrinth from Silveira's series pictured above is not a single path but a series of unconnected cubicles. Jung: "The projection is found in how the evil other is perceived and described by one who wants to get rid of everything he does not know about himself.. by foisting it off on others." Silveira's tanks can be seen in this way, but once the viewer becomes conscious of another's shadow, it takes on different characteristics. Geometrical abstraction is seem in panorama as a by-product of the dominant class of humans, rather than the artist creating a shape on behalf of them. If Oiticica responded to the times by seeking out the faces rather than the faceless, Silveira would likewise seek out life's particulars in her lighter and more process-oriented fare that was to follow. Impressionism made the shadow mostly representational rather than symbolic, as van Eyck and others would cast 'the shadow of the Almighty' on his figures, leaving it to di Chirico to bring symbolism back to the shadow. From Silveira's works of the early 70s, tension between the symbolic and the representational accompanies all of her shadows.
Posted by Ian Keenan at 3:25 PM